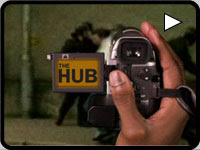 Earlier this year, WITNESS, an organization that uses video and online technologies to open the eyes of the world to human rights violations announced the launch of a beta version of its new “Hub” as a global platform for human rights media and action.
If you ever needed an example of the power of Web 2.0 and the potential it has to further the work non-profit organizations, this is it. Not only does The Hub serve as the first community-driven participatory media site for human rights, it’s an interactive community where you can upload videos or photos, watch what’s being uploaded, comment on and share what’s on the site. You can search for video based on highest rated, most viewed, by issue or by region.
The website has more than just video. There are also extremely valuable resources such as Video Advocacy Guides, Tool Kits and Resources. There are also chances to encourage individuals to learn more and to get involved in specific campaigns, advocacy groups and actions that can make a different. You can connect with groups, or create one of your own.
The Hub also works with partners and allies in the human rights movement, including Breakthrough, Amnesty International and Human Rights Watch. To watch a 60-second Hub Video click here.
The Hub is important not only for its ability to provide information to a large group of people, but also because it provides access to those who decide to use it. Its power come from its members. After spending some time on its website, you can tell that those behind it have truly looked at the landscape of the Internet and used new digital technologies to further its mission of documenting human rights abuses. Let’s hope it’s the first of many innovative projects of its kind.
Posted by Elizabeth R. Miller at 8:49 AM

Newer Post Older Post Home
Subscribe to: Post Comments (Atom)
The Overbrook Foundation, located in New York City, is a family foundation established in 1948 by Frank and Helen Altschul. The Foundation took its name from Overbrook Farm, the Altschul family home in Stamford, Connecticut. At the end of 2011, the Foundation has an endowment of approximately $122.6 million and had awarded approximately $6.1 million in grants over the course of that year.


To visit The Overbrook Foundation online, go to http://www.overbrook.org/.